A Michigan Wedding Experience too Amazing Not to Share

HomeDJsA Michigan Wedding Experience too Amazing Not to Share

A Michigan Wedding Experience too Amazing Not to Share 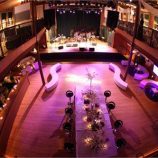 Andrea suspected that Nick and Bob’s wedding was going to be EPIC from their very first meeting. During their pre-wedding planning, Andrea and the grooms were in complete sync on every aspect of the event, from start to finish. During that meeting, Nick and Bob stated that their guest’s entertainment was the most important priority of their special day and boy did that make sure that happened!

The beautiful day started with the couple’s very touching ceremony. The faces of the groom’s parents when they exchanged their wedding vows were something our Music Box DJs will never forget; their parents beamed pure joy and pride as their sons made their commitment of an everlasting bond to each other. DJ Andrea and Chris were grateful to have witnessed such a timeless moment in this couples life. 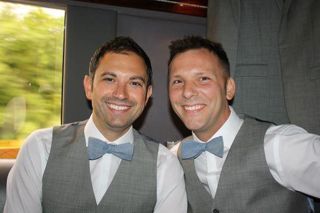 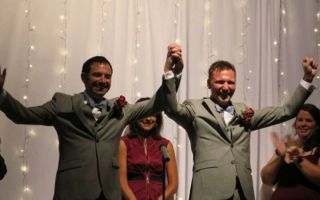 The moment Nick and Bob arrived to the reception, they greeted both DJ’s with open arms. Andrea said, “Their warm greetings was like I had been friends with the couple for a lifetime!” The minute the reception began, the entertainment was in full swing as Bob’s Dad gave a toast that had everyone in the room laughing, he stated, “I don’t see what the big deal is; I’ve been having the ‘same sex’ for 36 years!!”

Shortly after dinner, the newly married couple took the stage for the traditional first dance, they danced to Shania Twain’s “From This Moment” but unlike common tradition Nick and Bob broke out in a choreographed dance routine to Lady Gaga’s “Born This Way.” From that moment, everyone was on their feet and ready to party the night away! At one point of the night Nick, the groom, requested the microphone to perform an impromptu karaoke version of “Don’t Stop Believing” and “Some Nights.”

Incredible energy surged from family and friends as the dance floor was packed the entire night. “Turn Down for What” was an absolute hit accompanied by a reminder that there was only one more hour of partying to go. The DJs used this song to challenge to the guests to really rock out hard for the last hour, they did not disappoint!  Towards the end the guests formed an enormous group hug around the newlyweds and showered them with love. 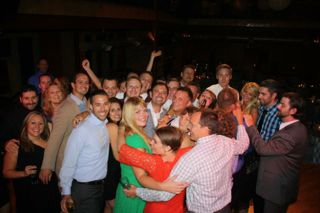 Throughout the event, The DJs had a very hard time figuring out which guests were from which “side” of the family. The DJs described the night as everyone being intermingled with each other as if they were a part of one large family. Looking out into the crowd throughout the night whether it was during the toasts, eating dinner or getting busy on the dance floor they couldn’t help but notice the amount of love and warmth that filled the room. Andrea said “it was unlike any other event, there was so much love and support in that room the walls could barely contain it.”

Have you ever been to a wedding so awesome you just had to share you experience with everyone?